My work is a poetic act of evoking a moment in time through the weaving together of visual textures. I reconstruct, using a combination of photography and collage. Three 5” x 5” pigment prints on newsprint are dissected into 1” strips and composed to form a new landscape. The pieces are meditative reflections to be viewed with different levels of perception - allowing the eyes to focus, trying to create order, and finally, letting the image of textures, colors and subject matter blend and soften.

The Reflections on Spain series is composed of photographs taken on a 2010 trip to Madrid and Cabo de Gata Natural Park on the Costa de Almeria, a UNESCO Biosphere Reserve. Two of the pieces from Madrid reference PHotoEspaña, the International Festival of Photography and Visual Arts. PHotoEspaña has earned a reputation for being one of the most relevant visual arts events in the world. The heart of the festival in Madrid is located along the Paseo de Catellana, which runs through the city center. When I was in Madrid there were large-scale advertisements for the festival on the Paseo del Prado and the iron fences that surround the gardens of El Retiro. These advertisements became the subject of two of the Madrid pieces.

While exploring some of the galleries in the Chueca barrio I stumbled upon the unique café of Olivia te Cuida, another subject in one of the Madrid pieces. The café can accommodate at most ten people. The vibe is relaxed, natural and chic. Diners toast their own bread at breakfast then in the afternoon the toasters are stored one by one on the stairs to the basement. Cardboard stools with removable lids store diner’s bags as they sit along a low bar facing a mirror reflecting the larger, community style dining table in the middle of the space. Olivia te Cuida quickly became a favorite lunch spot for relaxing and escaping the summer heat of Madrid, and to share a good meal on hand thrown dishes. The café represented a calm resting place in the midst of a city that is all about living passionately in the moment.

The rest of the series draws inspiration from the stark landscape of the volcanic Sierra del Cabo de Gata as it plunges into clear, azure waters in the Cabo de Gata Natural Park. As soon as I arrived at the Rodalquilar Valley house I felt a deep connection to the land and a sense of calmness, as if soothed by the desert sounds and visuals. Arriving after spending a week in Madrid, it was a stark contrast to the visual and vocal language of the country’s capital. Some of Spain’s most flawless beaches are strung between coves and rugged cliffs of considerable grandeur. With just 100mm of rain in an average year, Cabo de Gata is the driest place in Europe, yet, more than 1000 varieties of animal and plant life thrive in the arid, salty environment. I feel in love with the prickly pear cacti or chumbera terracing the hillsides to prevent erosion, and the valley views of layered decomposing agave plants and other desert succulents mixed with emerging new plant life. The contrasting life of the reserve intrigued me. From white flamencos with pink wing tips in salt flats to an abandoned silver mine in Rodalquilar. Traditional local building methods and materials were used to construct the white washed, flat-roofed houses in the fishing village of Agua Amarga and the valley town of Fernan Perez. Due to a park requirement, new buildings can only be built if they are an improvement to an existing structure. This regulation has limited the development of the Cabo de Gata Natural Park to the villages, allowing a vast landscape for reflection. The landscape pieces from Cabo de Gata are a meditative reflection on the fullness of life in this Mediterranean desert. 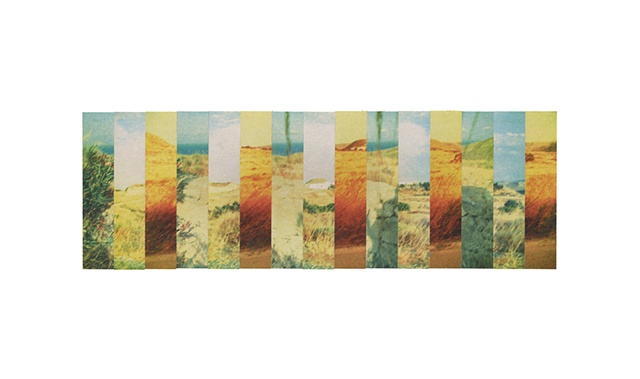 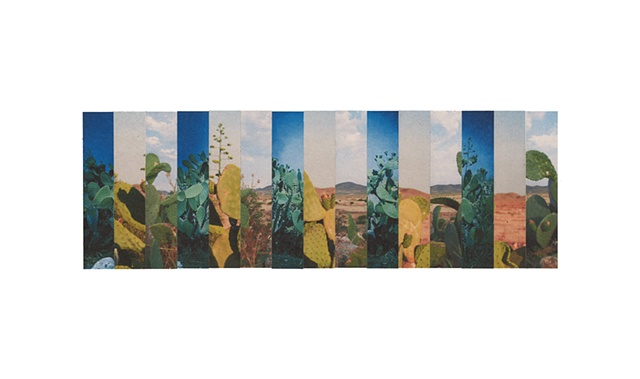 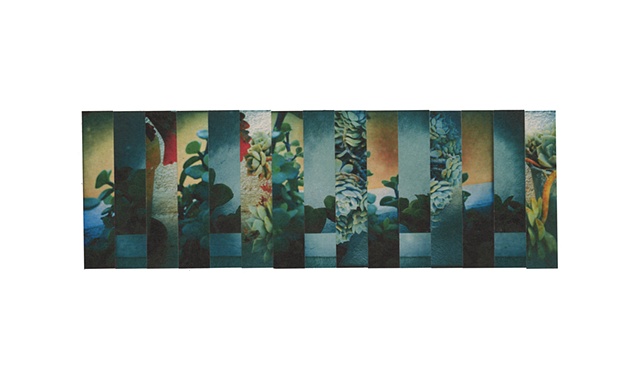 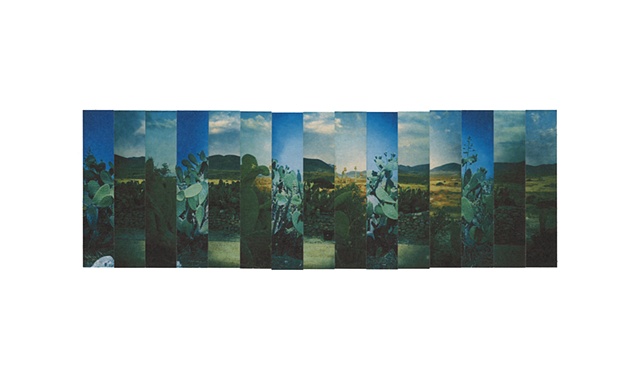 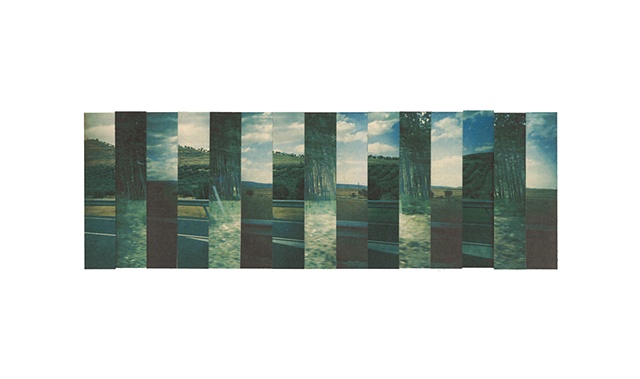 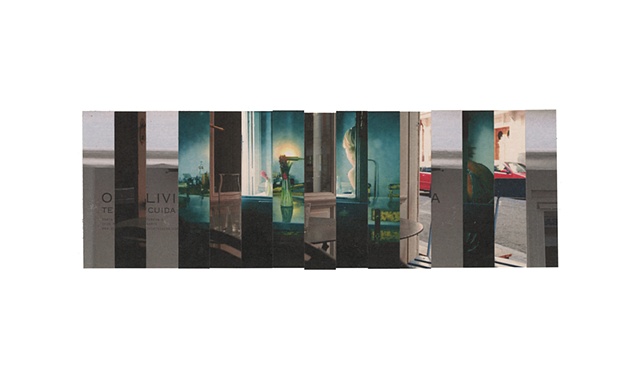 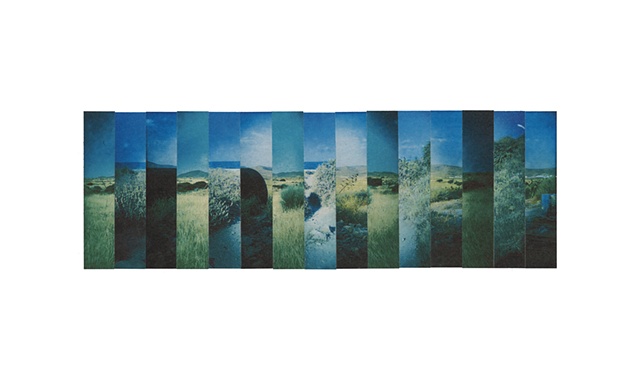 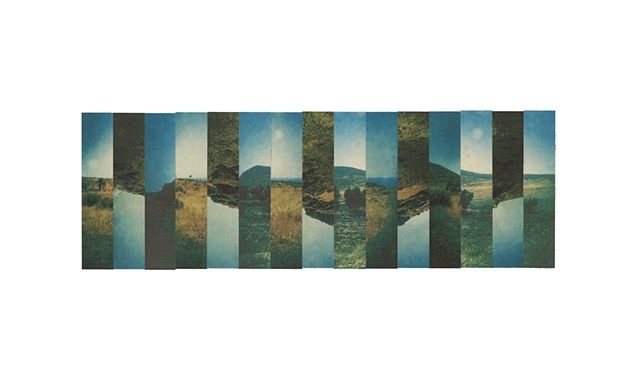 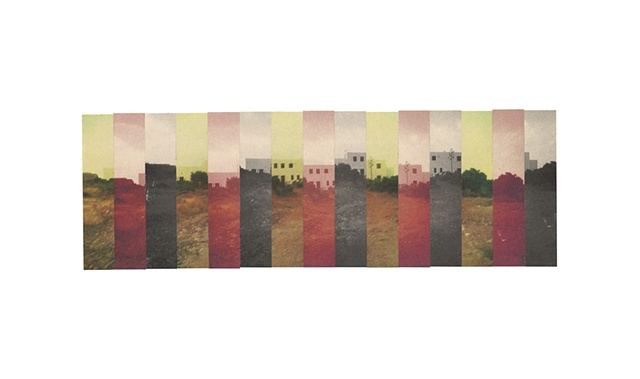 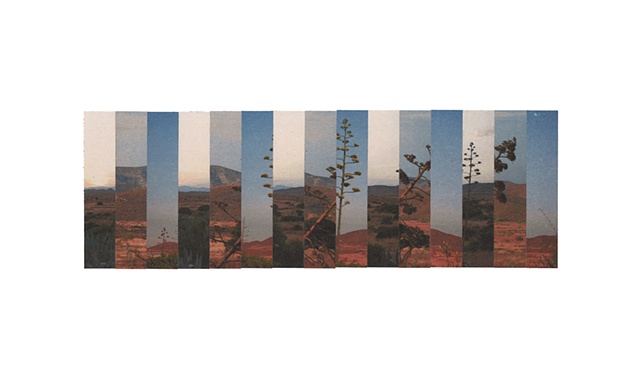